It is a common misconception that taking calcium is key to have strong bones. In fact, most bone fractures happen in countries where people drink a lot of milk. Many women in the United States are taking daily calcium supplements. However, osteoporosis cases are still on the rise instead of becoming a thing in the past. 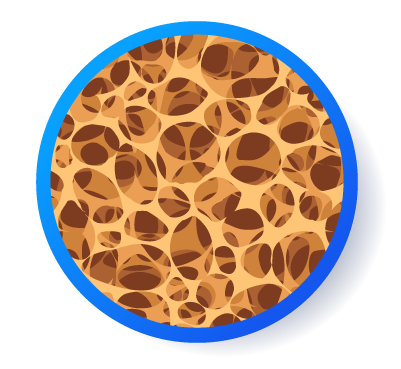 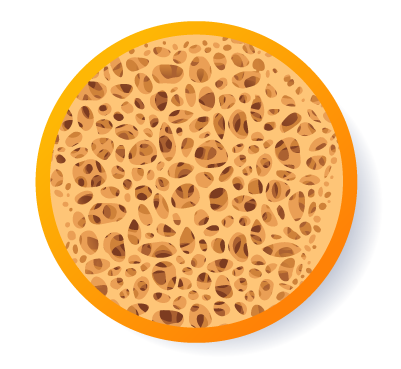 Healthy bones are bones with high bone density and elasticity

Many turn to calcium and vitamin D supplementation to build healthy and strong bones. But in fact, there are other key nutrients which are not discussed in as much depth as there should be, such as Silica.

Silica plays a vital role to build bone and maintain its strength and integrity. A growing body of scientific literature also recognizes the importance of dietary silica for bone health. Undoubtedly, our bone needs more than just calcium to rejuvenate and grow strong.

Osteoporosis is a major public health threat worldwide, which affects around 200 million people globally. (Osteoporos Int. 1992 Nov;2(6):285-9). Recent research has found that calcium supplementation alone is not adequate to address osteoporosis or reduce the risk of bone fracture.

Osteoporosis, or porous bone, is a bone condition characterized by low bone mass (low bone density), decreased bone strength and increased risk of bone fractures. Healthy bones are continuously being broken down and rebuilt in small amounts. While it varies among individuals, most typically reach peak bone density at the age 30 when the body forms new bone faster than it breaks down old bone tissue. After age 30, the bone building balance naturally shifts – to faster bone loss than gain. During which, bone rebuilding cannot catch up with the rate that bone is being broken down. This process quickens especially after menopause whereby women can lose up to 20% of their bone density in the first 5 to 7 years after menopause. A drastic decrease of estrogen at this time is a major cause of low bone density or bone loss. 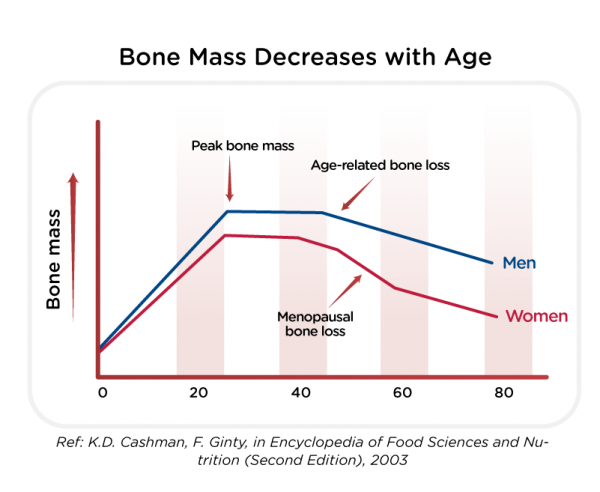 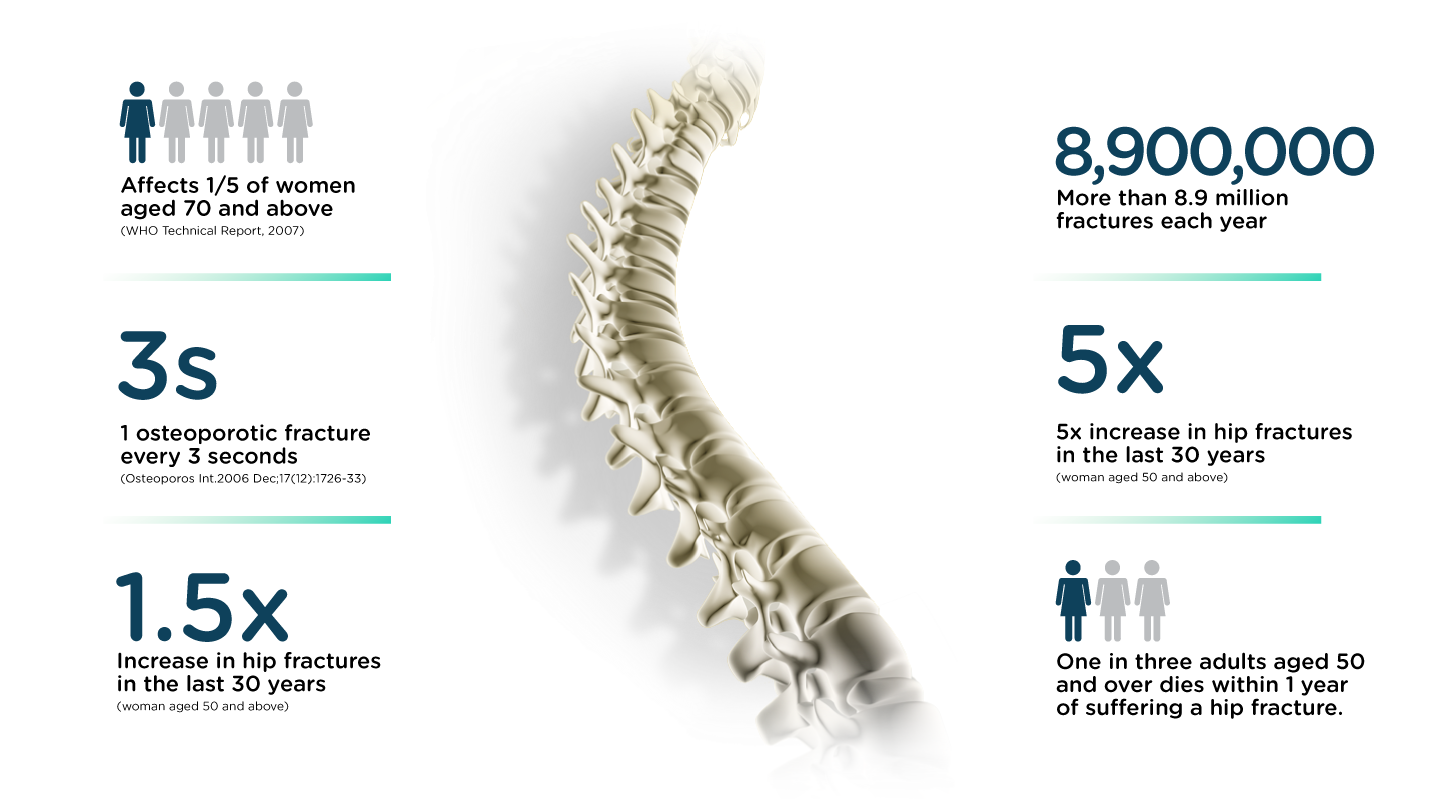 Signs and Symptoms of osteoporosis

Bone loss happens silently and progressively. In the early stages, they may not be easily detected, but towards the later stages, one may feel
pain in the bones, especially in the lower back. The bone becomes more porous, fragile and prone to fractures, especially in the hip, spine and wrist. Besides pain, people with osteoporosis may suffer from spinal compression fractures, which results in height loss and hunched posture. While osteoporosis can affect any bone in the body, fractures in the hip and spine are especially worrying. Knowing the signs and symptoms of osteoporosis is crucial to helps us prevent this silent killer.

In general, the symptoms of early stage osteoporosis are very mild, which people do not usually associate them with bone loss and they are
often neglected. They are:

With continuous bone loss, signs and symptoms of osteoporosis become more pronounced and noticeable, which include:
1. Bones break easily
2. Loss of height over time
3. Stooped posture
4. Back pain
It is noteworthy that while there are medications prescribed for osteoporosis, it is only targeted to maintain the current bone density. However, Silica-Rx99 goes the extra step to help increase bone density! 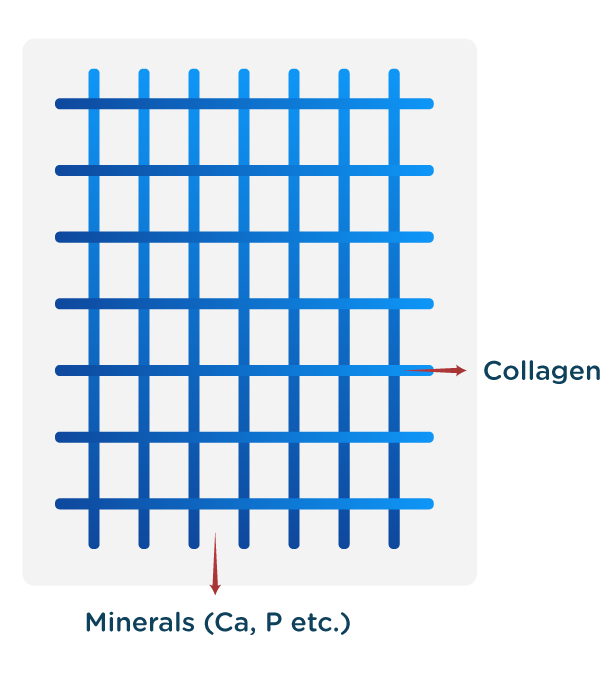 The bone consists of both minerals and collagen. Some scientists liken the bone construction to that of a building. In a similar fashion, the collagen (steel rods) supports the bone (building), and a mix of minerals, such as calcium (Ca) and phosphorus (P) is the concrete. Without the steel rods, the concrete would be brittle and fracture. Without the concrete, the rods would bend because of lack of support. As we age, the collagen amount and bone mineralization process decrease significantly. This affects bone rigidity, density, elasticity and flexibility. The bone becomes more porous, weakened and susceptible to fracture, even for a slight fall. Hence, maintaining bone mineral density, collagen synthesis and cross-linking of collagen strands (for bone flexibility) is of utmost importance to support optimal bone health.

Calcium is not the only component in the bones. In fact, bones are made up of 3 major components:

Silica is vital for bone health

Silica initiates the bone mineralization process and maintains collagen cross-links in the bone, thereby playing a vital role in supporting healthy bone density and flexibility. Unfortunately, silica levels tend to decrease with age, leading to weak bones and abnormalities of collagen cross-links in bone. This can bring about bone stiffness and brittleness. Hence, supplementation with Silica-Rx99 is a natural, safe and effective approach to improve bone density and elasticity. Silica-Rx99 not only increases bone density of middle-aged and elderly, but also young male and female.

Silica is more important than calcium!

Study has demonstrated that dietary silica increases the rate of bone mineralization. This is supported in the case of calcium-deficient rats (Biol Trace Elem Res 2009, 128(3), 239–247). Other studies have found that the bone composition of rats fed low calcium diets, are affected by silica deficiency. This deficiency decreased the concentrations of calcium, magnesium and phosphorus in the tibia and skull (J Nutr 1980, 110, 1046–1056). These findings suggest that silica can promote bone mineralization, even under conditions of low calcium levels in the diet. It may also indicate that silica and calcium interactions in gut lumen could reduce the gastrointestinal absorption of silica (Nutr Bull 2005, 30, 222–230; Adv. Clin. Exp. Med 2011, 20(6): 677-682). This may be due to competition between calcium and silica for the same absorption pathway, or calcium forms insoluble calcium silicate that reduces silicon bioavailability.

“You shouldn’t be taking calcium with the idea that it will prevent bone fractures. Nonetheless, adequate calcium and vitamin D intake are still essential for healthy bones.” Dr. David Slovik, Associate Professor of Medicine at Harvard Medical School.”

Study 2: In a well-known massive-scale Framingham Offspring Study, the dietary habits of 2,847 participants (1,251 men & 1,596 pre-and postmenopausal women) aged between 30 and 87 were studied since 1970 and had their bone densities measured. The results showed that the group consumed more than 40mg of silicon per day has approximately 10% more bone density, compared to the group consumed less than 14mg of silicon per day. Hence, adequate silicon intake correlated positively with bone density in men and premenopausal women, but not in postmenopausal women.This study also suggested that the amount of dietary silica taken imposes a greater impact on bone density than the disparity in the amount of dietary calcium. 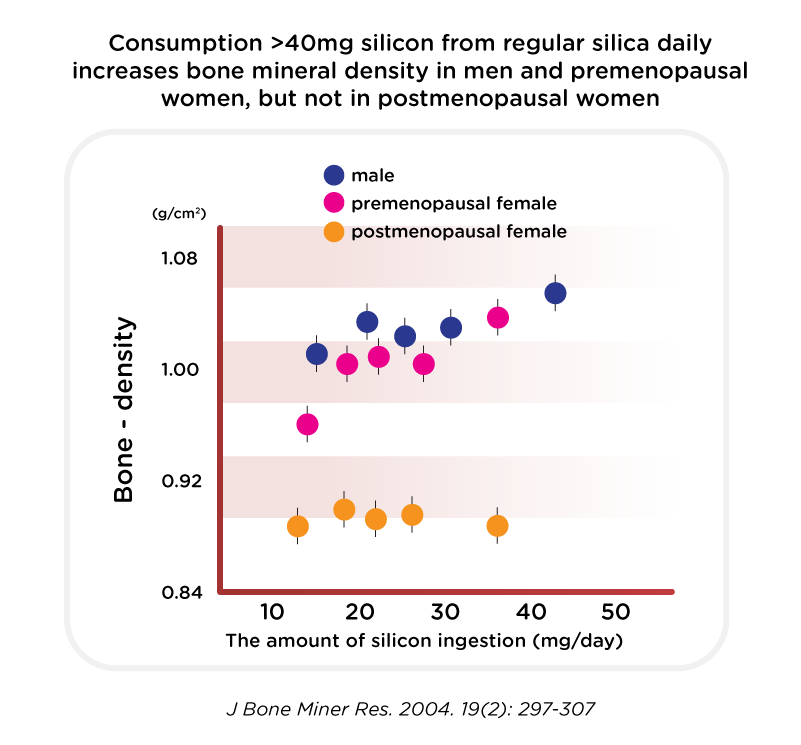 Study 3: In a monitoring test, 8 women aged between 45 and 82 years old and one man aged 58 years old were administered Silica-Rx99 (≥ 40mg silicon) daily for 6 months and their bone density was monitored. Surprisingly, all 9 participants showed an increase in bone density (100% efficacy). On average, the bone density increased 13%, even for postmenopausal women. Notably, Silica-Rx99 worked 4 to 6 times faster than a specific calcium supplement for all 9 participants. In this test, one participant was suffering from osteoporosis and her bone density kept decreasing despite taking prescribed drug. Nonetheless, her bone density increased after taking Silica-Rx99. Other than Silica-Rx99, there is no other silica products that can show such dramatic improvement in bone density in such a short period of time thus far. These significant findings have been published in Nippon Dental Newspaper and Medical Magazine Apolonia. 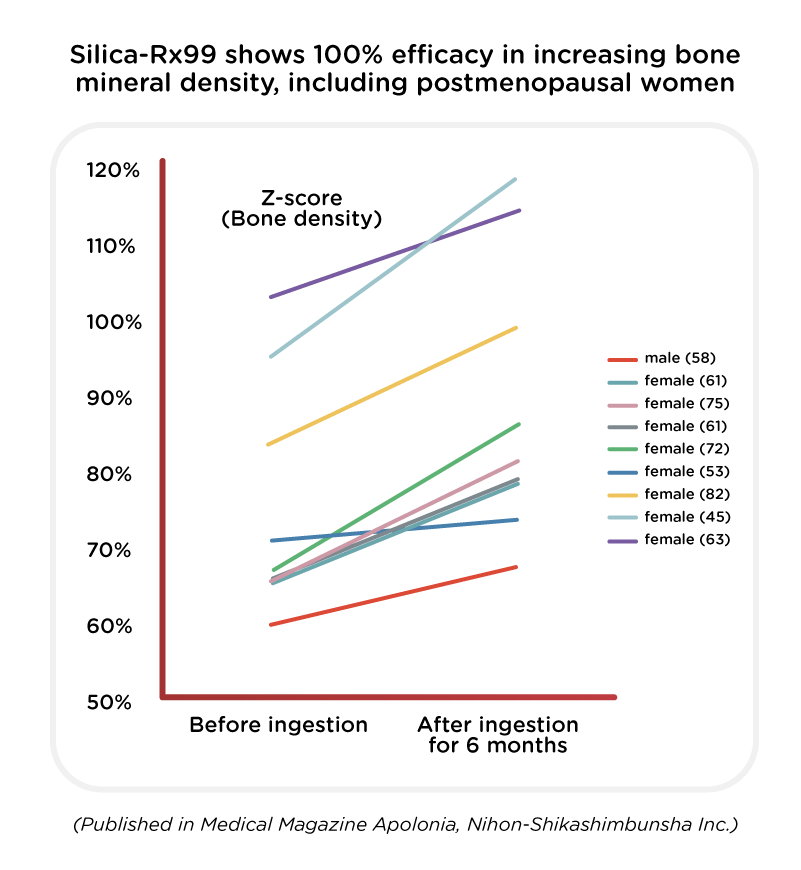 Study 4: Vitamin K2 suppresses the synthesis of prostaglandin E2 (PGE-2), which is a potent stimulator of bone resorption (bone broken down by the body). In this study, TNFα pro-inflammatory cytokine was used to induce PGE-2 production. The co-administration of Vitamin K2 (MK-7) and TNFα was effective in suppressing the PEG-2 production to a level comparable to baseline (control). 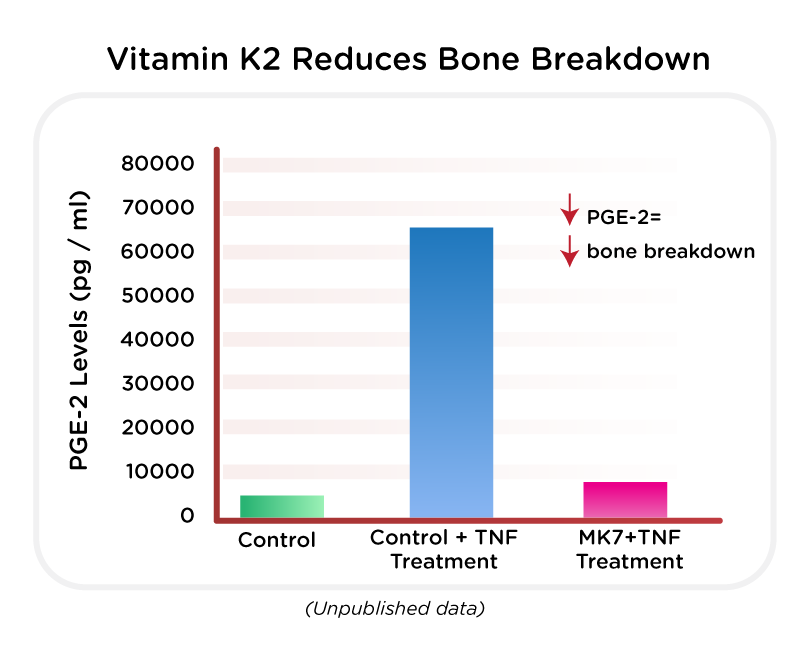 Study 1: A study conducted on elderly women reported that non-osteoporotic women are particularly high in vitamin K2 (MK-7). This suggests the association between high MK-7 and strong bones. 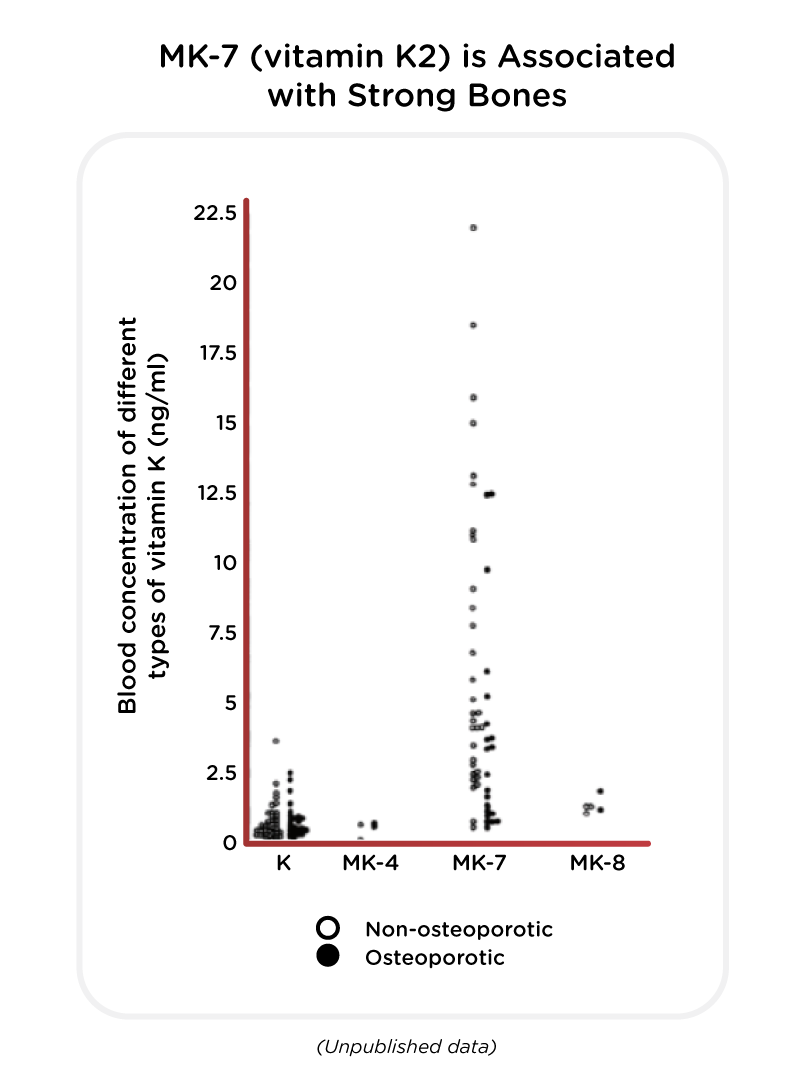 Study 2: A study shows that vitamin K2 (MK-7) is more effective than vitamin K1 in increasing activity of osteocalcin, a vitamin K-dependent calcium-binding protein in bone that has been linked to bone formation 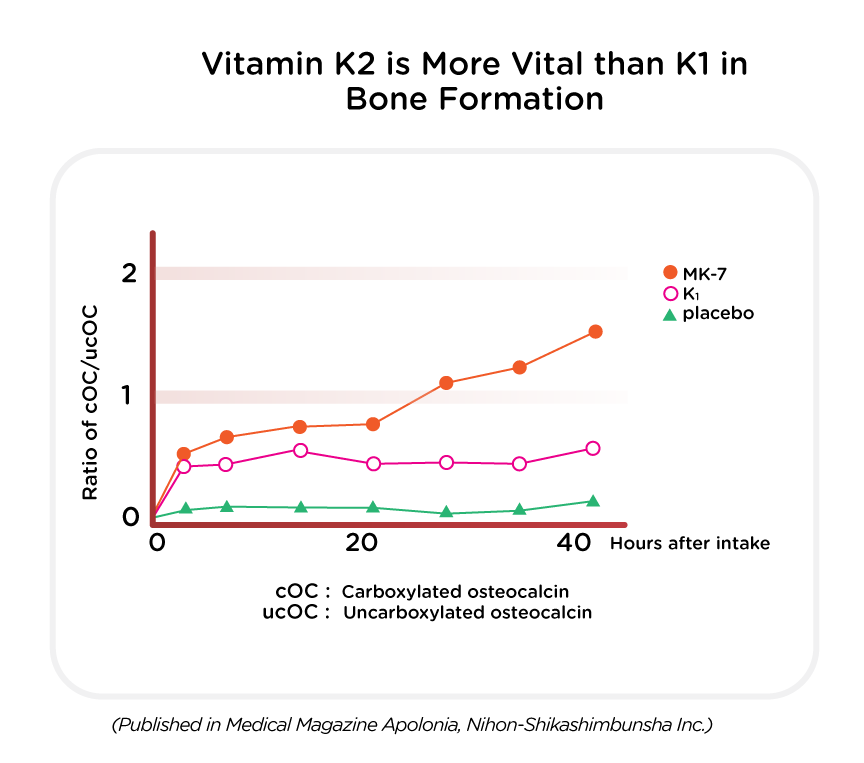